[This post stays up to date with the current meta for competitive Brawl Stars.]

Nita is a Common Brawler whose Super allows her to summon a cuddly Bear (Overbearing). The bear has high health and devastating fast melee attacks that can take down Brawlers with ease. Nita has moderate health and boasts an attack that has short range which can hit multiple enemies. 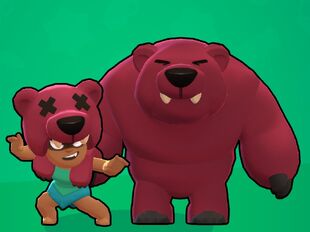 Attack: Rupture – “Nita sends forth a shockwave, rupturing the ground and damaging enemies caught in the tremor.”

Super – Overbearing – “Nita calls the spirit of Big Baby Bear to manifest and maul her enemies.”

Nita’s attack – Able to hit multiple enemies so take advantage of situations when the enemy is grouped together.

Nita’s super – Able to be cast over walls. Use this when enemies are hiding behind a wall. Nita’s super can also be used as the team’s tank with its high hit health. Nita’s bear is also programmed to detect Brawlers hiding in grass.

Brawl Strats is happy to highlight the technical players that stand out in our Brawl Stars community. We have connected with a couple members of the Brawl Strats community to feature their guides onto our website. This will allow us to archive guides together so that they’ll be easier to reference as we become more knowledgeable about Brawl Strats. We’ve chosen to highlight /u/uxolane’s Nita guide.

/u/uxolane submitted a Nita guide that can be used for competitive gameplay. We recommend reading up on multiple Nita guides to ensure your technical understanding of the Brawler. You can find the original Reddit post here (upvote to give thanks).

More Nita guides will be updated onto this guide as they are discovered in our community. We only highlight guides that we have been given permission from. If you would like to have your guides featured on our website for the community to access in one place, feel free to connect with us.

In this post, I will share some advanced tips with Nita and hopefully help you use her better. Let me first start out with some info about her:

Pre-Bear Playstyle: Because of Nita’s small attack range and strong super, you want to adopt a passive-aggressive playstyle. Your main goal at the beginning of the match is to farm your bear up (the strongest super in the game). Start off matches by walking along the flanks of the map, hiding in bushes. You want look for opportunities to get a few hits off onto enemies, thereby charging your super.

Post-Bear Playstyle: Ok, so you farmed your bear. Now it is time to make the most out of it. The most important thing to know about the bear is that if it does damage to an enemy, it will charge your super. This makes it very easy to farm subsequent bears if played correctly. The bear is whole new player and force on the field. If you place a bear in a certain area, you are essentially forcing enemies out of the area. This means you can use your bear to drive enemies from an objective, shield you or your teammates, buy time, or corner enemies. Here are some of the most effective bear plays:

In essence, these bear tactics help you take out opponents and give you map control on modes like S/G. If you stick to the passive-aggressive play mentioned in pre-bear play, it becomes easy to farm a subsequent bears and retain map control. With the bear on the map, it does allow you to be more aggressive, but know your limits and when in doubt, take the safer route.

Miscellaneous Tips: – Try to avoid throwing a bear into Bull or Shelly; these brawlers can kill it in 2-3 shots at close range. Likewise, try to target characters like Bo, Jessie, Poco, and Barley, who have low base damage. – Remember that Poco and Nita’s attacks go through other brawlers, so your bear cannot shield their attacks from you or your teammates. – Do not throw the bear into the enemy spawn unless you are finishing off a weakened enemy; it usually gets shredded by newly spawn, invincible enemy brawlers. – Remember that the bear gives your team map control; don’t give this up by dying.

If you made it this far, thank you for reading my first guide. If you have any suggestions or improvements I could make, please tell me below.

Another Brawl Stars blogger by the name of cdw2014 from brawlstarsblog.com wrote a Nita guide highlighting the Brawler’s strengths and weaknesses. cdw2014 shared how to take advantage of Nita’s strengths such as the Bear to bully opponents and to keep them on the edge. Like all Brawlers, Nita does her have weaknesses. cdw2014 goes into detail about how to overcome Nita’s weakness in order to become a more versatile Brawler. cdw2014 also writes a mini strategy guide for each of the game modes in Brawl Stars for Nita. It’s worth checking for Nita players. Check out the article here.

If you enjoyed this blog post, subscribe to our blog to stay up to date with how Nita is doing in the competitive scene. Let us know in the comments what you think we should add to this Nita guide!